Do we need a CDO for Wales?


We're reaching the end of the beginning of the work of the panel on Digital transformation of public services that I'm leading for the Welsh Government. I'm hoping our initial report will be out in the next week or so.

One issue we've been debating is whether Wales needs a Chief Digital Officer.

As I touched on in the last blog there is currently a gap at the top - very few of the leaders of our health boards, local authorities and senior civil service can be said to be confident digital leaders. In fact, most feel embarrassed to admit they don’t really understand it.

Most highly paid people in public organisations can talk easily about money, people and buildings. Some of the better ones actually recognise the importance of culture, but how many can, or more worryingly want, to tell the digital story that will drive their evolution? As one insider told us "Digital in public sector is still largely a space for techies and this needs to change. It needs to become the preserve of the majority, the people that know what life is like in the wind and the rain".

Very few public bodies have their own CDO, or board level leadership for digital. What's more, there is no Chief Digital Officer for Wales. While the Welsh Government has a Chief Digital Officer (who has done lots of good things from close to a standing start), her role has no budget, and its writ doesn't run much beyond Cathays Park - and does not extend to the NHS or Local Government. She's the CDO for WG, not for Wales.

There's a strong argument for having a ‘guiding mind’ for digital developments across all public services.

The real debate is over what that role would do. Should we be building a strong centre with powers to mandate, set digital service standards, and to veto duplication and waste across the public sector - much like the UK Government did when it established the Government Digital Service? Or should we have an evangelist that can promote best practice, encourage, lobby, tell a story, but without any powers to direct?

"The more centralised you go the more vulnerable things are to gridlock of decision making, budget cuts etc. I’d sooner see every public body commit to a serious CIO/CDO role on their management teams as well as a head of design (more importantly almost)" is the view of one experienced digital innovator.

But is it a false dichotomy? To see real cultural change perhaps we need a serious commitment from each public sector organisation AND a strong leader with status and power to guide?

The history of public sector organisations in Wales working together is not an encouraging one. If this debate gets caught up in the debate over who has 'sovereignty' it may be doomed from the start. Perhaps there's a middle way?

One of the main constraints (and there are a few) for real digital change is capacity - there simply aren't the bodies around with the mix of skills required to bring about change.

I blogged previously about the approach the British Gas Data Science Centre in Cardiff have copied from from digital music service Spotify. They have assembled 'Squads' (or teams) of digital specialists who can be deployed across the organisation to work on solutions to problems that have been identified. These are multi-disciplinary and each has someone with similar skillsets - for example there's a User Researcher in each. It's worth watching this video to see how it works

Each of these Squads cross-pollinates - the specialists don't just work in their own team, they also work across teams with their own expert peers working on other projects. This way silos can be broken down, and experienced shared. 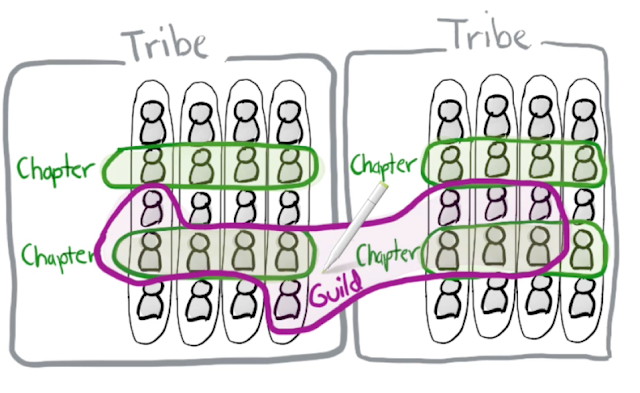 It's beginning to work in British Gas, which still bares many of the characteristics of the large public sector organisation it once was. Could it work in the Welsh public sector?

If a group of these multi-disciplinary Squads was hosted in the centre working to a common set of digital standards, and under the direction of a high-status Chief Digital Officer, and were able to be deployed across the public services, could this be to a catalyst for wider change?