So I think we’ve established that things aren’t where they should be, and we’ve known this for quite some time. So what’s holding us back?

Stripping it back to first principles I think there are two key issues emerging: leadership, and the concept of who services are designed for.

On leadership, it is commonplace for a Chief Executive of a Health Board or a Local Authority to admit (without embarrassment) that they don't really 'do' Digital. When pressed, most will talk about digital interchangeably with IT. Many of our public services leaders are still on analogue mode. That has got to change (more on that in another blog post).

On the concept of who services are designed for, I was struck by a conversation I had with the leadership at NWIS. When I asked if they had people specifically working on User Research I was met with blank looks. Whilst they do have people engaged in research and there is some user feedback, there are no posts in NHS Wales - or in Welsh Local Government - dedicated to understanding, designing or testing services from the end user point of view.
Worse still, I don't think there's a clear idea of who the 'user' is for many of our services. Indeed, reading the Welsh Government's key document of the future of the NHS A Healthier Wales: our plan for health and social care, you could be forgiven for thinking that the users that the system is being designed for are the clinicians not the patient.
In contrast the Scottish Government have adopted a new Digital First Service Standard which has the need to understand user need as its first principle 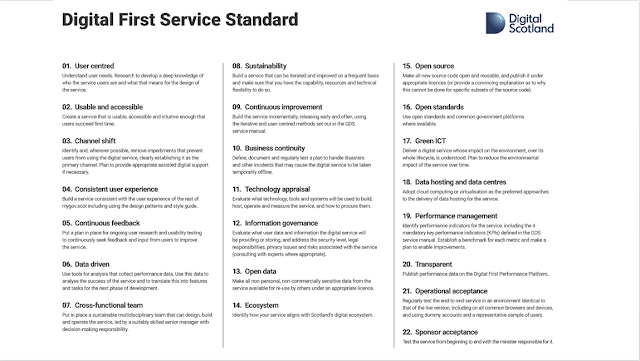 I visited Edinburgh and met the team working on a new Scottish social security system, they explained how on this major project they were putting a strong emphasis on User-Centred Design.

This is clearly easier to achieve on new projects (or 'Greenfield' to use the GDS terminology) than it is on legacy projects (or 'Brownfield'), and they acknowledged they had to make trade-offs as this very complex project is implemented to a hard deadline, but the philosophy behind it is clearly the right one. 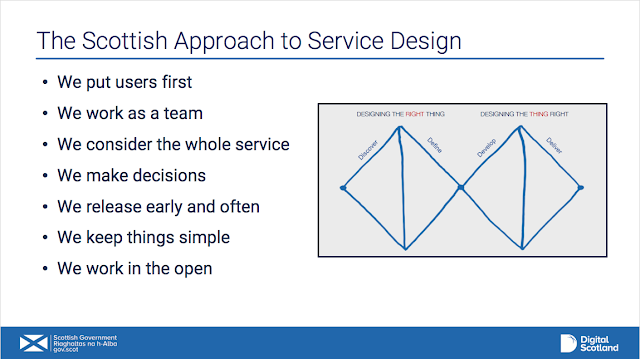 The team have developed a user engagement strategy and have embedded User Centred Design professionals in service teams. By consciously building design capacity, and fashioning multi-disciplinary teams, they are working to change the culture of how public services are thought about.

Instead of approaching digital as we traditionally have thought about IT projects  - where once we've procured a new system we've regarded the problem 'fixed' and safely left alone until the system becomes outdated (at which point another big private sector IT system will be procured) - the ideas of continuous improvement familiar to industry should be applied. 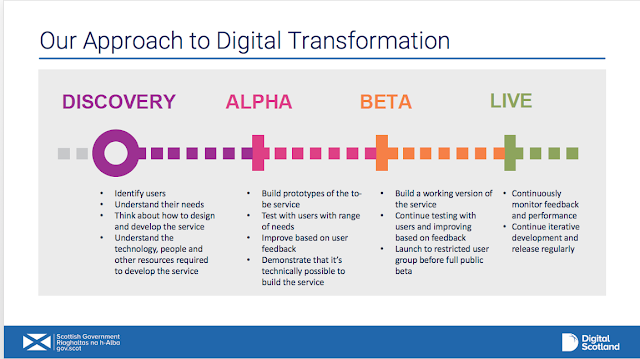 I heard a similar story at the British Gas Data Science Centre in Cardiff. The utility company have a Data Science team based in Cardiff working on projects for the company right across the world. Whilst the utilities are private companies they still resemble the large siloed organisations they were when they were in the public sector, and we can learn from the way they are evolving in the digital age. Peter Sueref, their Data Science Director, explained how they have drawn inspiration from digital music service Spotify. To implement Agile in bringing about digital change the Data Science team have emulated the Squad approach used by Spotify. It's worth watching this video to see how it works

Could this work in public services?

The current plan for Welsh Local Government is to appoint a Chief Digital Officer based in the Welsh Local Government Association. Should we instead be thinking of a central squad of digital experts that can work across public services (health and local government included) that would use agile project and development methodologies to work on practical problems identified from within the sector?

I'm attracted to the idea, but what do you think?
Posted by Lee Waters at 03:57

The UK Government Digital Service similarly stressed user focussed development. Their head used to stick PostIt notes on the back of everyone's phone that said "How does this help a user?" to try to keep spending focussed on it.

I don't know if you follow @swardley - Simon Wardley, but he's produced some very interesting stuff on Government IT projects and overspend esp. using budgets to drive success.