No point reinventing the wheel

Much has already been written about the state of digital in the Welsh public sector.
As a starting point the panel on Digital Transformation that I've been asked to lead for the
Welsh Government has decided to revisit the work done in recent years to reassess the
findings of other reports and understand why little progress has been in made in
implementing them. And rather than reinventing the wheel are there conclusions and
recommendations from these existing reports that we should revisit?
I'll blog on each of them in-turn. The SOCITM report on the digital maturity of Welsh councils, the digital chapter in A Healthier Wales: our Plan for Health and Social Care, and the WAO report and the forthcoming Senedd PAC report on NWIS.
In 2015 technology entrepreneur David Jones reviewed digital activity across Welsh local government. The report, Why Local Government Must Go Digital, found that the local government digital world is complex, sprawling and fragmented, with even the smallest local authorities in Wales having over 100 separate systems. It reported that many councils in Wales are ‘behind the curve’, “the default discussion point for most of councils was their website. Several felt that re-designing their site, or adding in new areas of functionality represented a significant shift in their digital presence” the report said.
David Jones concluded that Digital leadership at the highest level is very limited and patchy, and councils are too dependent on buying in private sector solutions and existing technologies, methodologies and working practice are 20 years out-of-date. It found a consensus amongst local government leaders that there has been too much focus on strategy and too little on delivery.
The report found an expectation amongst Local Government that Welsh Government should
show digital leadership, but a weariness of past promises and weak delivery that this would
happen. The Jones review concluded that Welsh local government has no significant
capability for digital transformational change, and collaboration and shared leadership are
critical to developing digital services at scale to unlock savings and improve services. It
recommended that the Welsh Government should encourage and enable Councils rather
than mandate based on an ‘action orientated’ Welsh Digital Framework. 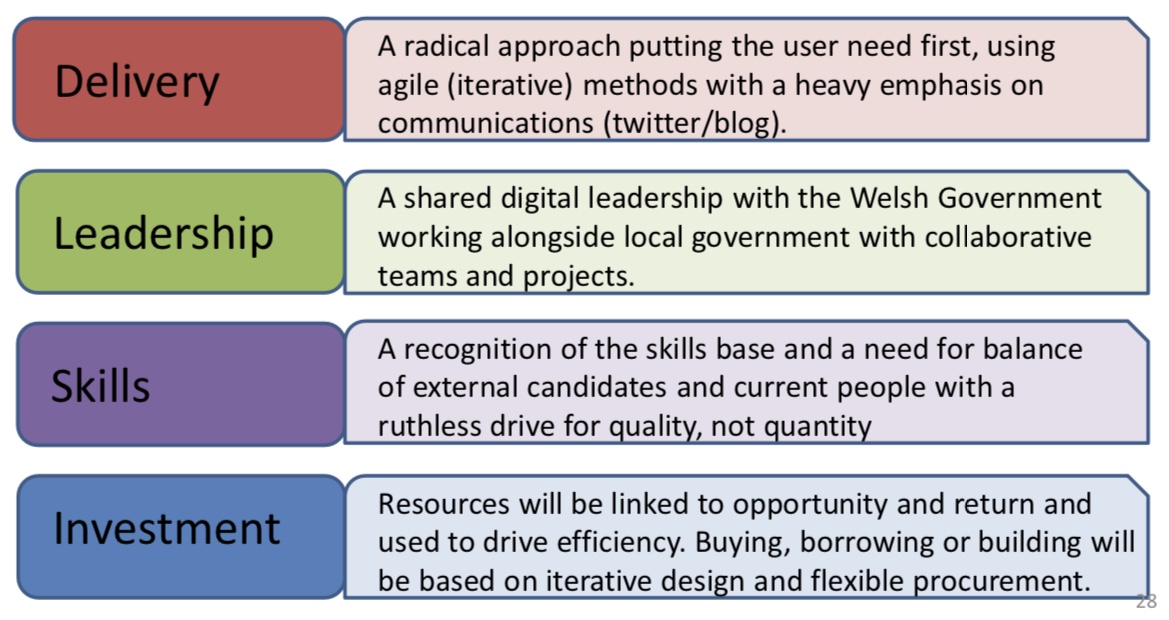 The report suggested actions under each of four suggested core principles:
Delivery A Welsh Digital Local Government Services team comprising the following expertise
would be required:
IT Disciplines
Service Management – which already exists across local government:
Leadership
The required engagement needs to exist across all levels:
The initial total time commitment of any team is likely to be biased towards engagement
above technology
Skills:
The skills necessary to achieve digital transformation do not exist across the public sector
in Wales. A blend of existing knowledge and new skills will be critical. Given the past
experience of GDS an emphasis on quality will be very important.
Investment
Investment will be needed to drive transformational change. However, this should be
concentrated on investing in people and upskilling existing staff. There are no obvious
requirements for capital spend (but these may appear on further examination…for instance,
end-of-life vendor software).
The report set out a timetable for change: 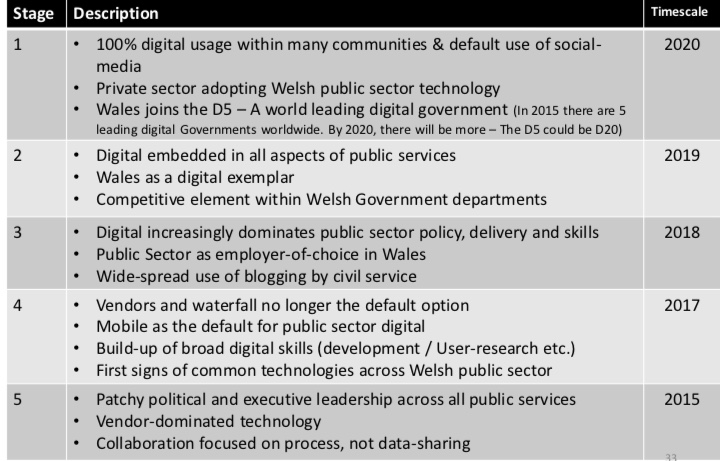 The Jones review found that stakeholders consistently raised the issue as to whether a
focus on local government digital should be broadened to embrace and consider wider
public services. It concluded that it should, especially since a significant part of the work,
such as infrastructure, is common across all public services. The panel recommended an
approach based on phased growth, focused around four core principles of delivery,
leadership, skills and investment 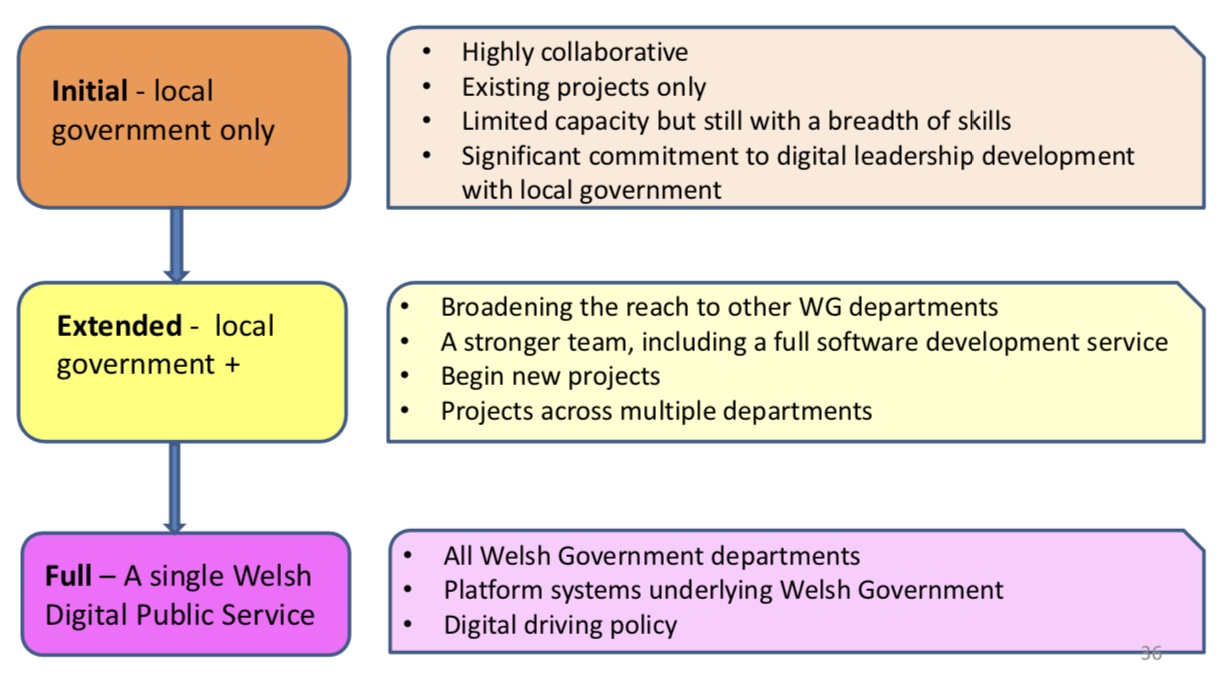 As a first step the panel recommended small team be established with a focus on a large
scale IT project that many or all local authorities have an interest in. Crucially, the report
recommended that the scaling up on the team be programmed in from the beginning.
Since reporting there has been little discernible action on the recommendations. The most
tangible outcome has been the further report by SOCITM report on the digital maturity
of Welsh councils, and the proposal to appoint a CDO for Welsh local government which
is currently being progressed.

This is a really good structure to work with, I would just make a few comments - we should spend a lot of time eliciting from residents what they want, but also do the same with all the government system holders too as they are very much users as well. Also, Agile is a very good model to use as long as you spend the time working with the different stakeholders to get them onboard as it is a change of ethos and leadership model and somewhat scary. But I find that if it’s done well getting everyone on board, then you can save months in project delivery because everyone is (or should be) onboard. But I can’t emphasise enough that we must do digital with residents, not do digital to residents otherwise we lose people in the innovation curve and can’t get the best value. (You want to minimise or ideally eliminate laggards)

No change happens while there is insufficient pain in the system, the executives and politicians collude in blocking, turkeys dont vote for Christmas etc. Ultimately nobody is providing a sufficient imperative for change.

Big changes to structure and philosophy needed as well, to focus on ‘products’ not projects. Also, I worked with GDS and that model had a lot of holes. Skills wise, UX and software engineering (note not development) is fine, but also underlying conditions and philosophies like DevOps and agility are key. But if you want to get a grip on LA IT you need a product structure and enterprise/global architecture, and design principles and toolkits; or it simply won’t work. For example, WG should be the product owner of the platform and the sub products could be the things the LA need to achieve based on capabilities e.g. identity management, forms, etc.