Speech to the National Assembly on 28th February 2018


I never wanted to have a role in this story. Carl Sargeant was a valued colleague of
mine and I remain deeply upset about his death.

But as my name has been mentioned I believe I should give my own account.

I am certain in my own mind that the text I received was gossip on the day of a reshuffle. As Andrew RT Davies acknowledged in his speech, there is often chatter around a reshuffle - that’s how I treated the text.

It was not from any official source and, in fact, I didn’t treat it seriously until I saw the statement Carl himself issued later that day.

I didn't pass on what I’d heard to any journalist, but told my colleagues at the first
opportunity of the text message I had received. And I gave evidence to the Leak
enquiry as requested. As I said I never wanted to have a role in any of this and I believe I acted properly.

There have been calls for me to say who sent me the text message. And I have not done, and will not do so, because I don't wish to contribute to a trail of breadcrumbs which can lead to the identification of any of the people who came forward.

I understand the frustration that more information from the report has not been published.

But I think it is right that the full leak inquiry report will be considered by the independent inquiry.

It will be for Paul Bowen QC to weigh the significance of this all, and judge whether the way this information was handled is relevant to the events that followed.

And Llywydd, the women have been forgotten in all this.

We will never be able to fairly test their allegations. That is neither fair on them, nor on Carl.

But at the very least let's not make the situation worse by directly, or indirectly, threatening their right to anonymity.

This whole tragedy has become the subject of political game-playing. And I want no part in it.

There are two more inquiries, and an inquest, yet to report. These processes need to be allowed to complete. 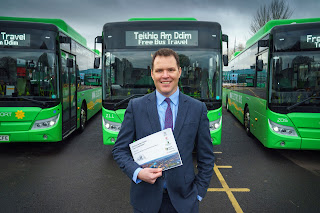 Does NWIS needs a reboot?

By Lee Waters - November 21, 2018
I've been blogging about each of the reports written for the Welsh Government in recent years on the state of digital in our public services as part of the digital panel I'm leading for the Welsh Government. My last blog on the subject covered the studies on digital in the NHS and summarised the findings of the Wales Audit Office Report, the Parliamentary Review and the WG's response 'A Healthier Wales'. The final piece of the jigsaw is the Public Accounts Committee (PAC) report ' Informatics Systems in NHS Wales' (full disclosure - I was heavily involved in writing it). The limitations of digital in NHS Wales have been features of a series of reports by the National Assembly’s cross-party Public Accounts Committee over the last two years. In its inquiries on hospital catering , as well as medicines managements , the committee uncovered delays of up to a decade in delivering IT projects. Following the Wales Audit Office report in January 2018 the committee
Read more